Background: Bilingualism is increasingly recognized as protective in persons at risk for Alzheimer’s disease (AD).

Bilingualism recognized as a way of delaying clinical AD
Investigators have increasingly recognized bilingualism, or the ability to use more than one language on a daily basis, as one of the most important modifiable risk factors for delaying the expression of clinical AD [2]. If symptoms of dementia could be postponed through promoting bilingualism, even for a few years, there could be major savings in both human costs and health economic considerations [3]. In fact, some, but not all studies, report a four-to-five year delay in onset of the clinical symptoms of dementia despite comparable neuropathology [4, 5]. The underlying neurobiological mechanisms for this influence of bilingualism on the expression of dementia remain unclear.

Cognitive reserve may be a potential explanation

Cognitive reserve involves the optimization of cognitive strategies and brain resources through education, occupational attainment, and engagement in social or stimulating activities [6]. Bilingualism increases cognitive reserve through the constant management of two simultaneously active and competing languages [7, 8]. Pervasive multilingualism could be a factor in the low prevalence estimates of cognitive complaints and dementia in older adults in Luxembourg [9], and, in the Lothian Birth Cohort (Scotland), those who learned a second language achieved better cognitive results independent of childhood intelligence [10]. Others report that the larger the number of languages spoken, the better the cognitive performance in the oldest old [11]. Brain structure is recognized as a key metric of cognitive reserve with larger brain volumes denoting increased reserve and lower risk for dementia [12].

The purpose of this study was to therefore compare brain volumes, a marker of cognitive reserve, in bilingual and monolingual persons with AD who were matched on age of onset/presentation and overall severity. Understanding this question will help determine the underlying influence of bilingualism on cognitive reserve and its relevance for AD risk reduction.

Given that about half of the world’s population has some degree of bilingualism [13], incorporating bilingualism as a prevention strategy for AD can have widespread implications.

METHODS
All participants in this study had Probable AD as determined by National Institute on Aging- Alzheimer’s Association (NIA-AA) Criteria for “Probable AD”.

Subject demographics in bilingualism versus monolingualism

In many cases, the NIA-AA criteria were applied retrospectively to patients diagnosed by older criteria. We identified 17 patients with bilingualism and Probable AD. All had sequential bilingualism (English learned after age 5) with various native languages. In addition, all of these patients were immigrants who used English primarily outside the home and were reported by caregivers or family as having the premorbid ability to converse in both languages. These 17 patients were matched for age of presentation within six years and global severity of cognitive impairment with the Mini-Mental State Examination (MMSE) [14]. Subject demographics of the bilingual and monolingual groups are detailed in Table 1.

Data from research participants, particularly the brain MRI scans, were analyzed as part of an IRB approved protocol (IRB# 16-001491). Each participant underwent brain MRI including a 3D volumetric MPRAGE sequence on a 3.0 Tesla Siemens Scanner.

Scans were then analyzed with an FDA cleared volumetric program (Neuroreader®, Aalborg, Denmark), as detailed in prior work [15, 16]. In each scan, 45 brain structures were quantified including the hippocampus, lobar structures, subcortical regions (thalamus, caudate, putamen, etc.), ventral diencephalon, midbrain, ventricular, and white matter volumes with an atlas-based segmentation, also detailed in prior work [16]. Total gray matter, white matter, and cerebrospinal fluid volumes were also computed. Total intracranial volume (TIV) was calculated from the sum of these three volumes and regional brain volumes are also generated as a fraction of TIV. The following metrics were therefore computed for each of the 45 structures: 1) Regional brain volume in ml; 2) the ratio of a region of interest volume to TIV; 3) the number of standard deviations from the normative database (NR index); 4) the number for standard deviations from the mean scaled between –2 and +2 (Z-score); and 5) percentile of comparison to the normative database. The normative database was drawn from control subjects from the Alzheimer’s Disease Neuroimaging Initiative (n = 231) with an age range of 60–90 and 53% women, 47% men. All normative database comparisons for computing Z-scores and percentiles were adjusted for age, gender, and TIV in a multiple regression model. A typical example of a Neuroreader® segmented brain is noted in Fig. 1. 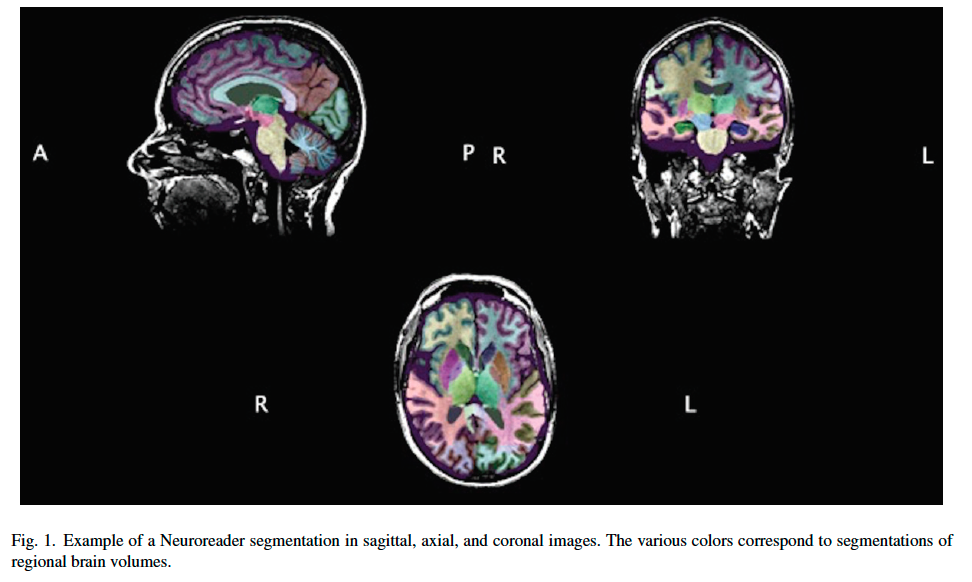 Bilingualism was related to multiple larger brain volumes with statistical significance or trends. Statistically significant t-test results had Cohen’s D effect sizes that were either moderate or large. 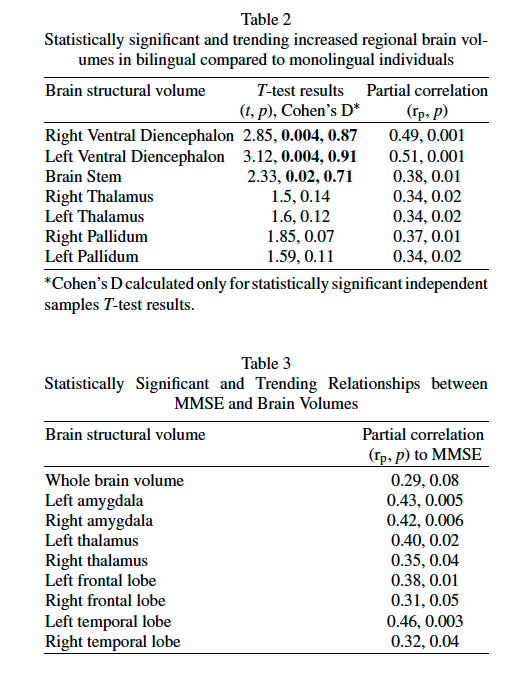 These brain regions may function as neural correlates for increased resistance for AD pathology in bilingualism. Additionally, the results suggest that bilingualism has potential as a preventive strategy for AD given its relation to larger brain volume correlates of cognitive reserve.

Prior studies of normal individuals have suggested structural and functional changes in bilingualism in language areas and their related connections. Several studies have shown increased gray matter volume in cognitively-normal bilinguals especially left hemisphere frontal regions and their connections for language functions and language control [7, 17, 18].

In contrast to relatively preserved language areas and their related connections, when bilinguals develop dementia or AD, they may have greater mesiotemporal neuropathology or hypometabolism at comparable levels of functional clinical impairment [24, 25]. One of these studies compared monolingual (34 MCI; 13 AD) with multilingual (34 MCI; 13 AD) patients and found higher tissue densities in medial temporal areas in the multilingual MCI group, but similar or lower in the multilingual AD group [24]. However, in language and language control areas, both of the multilingual groups had thicker cortex than the monolingual groups [25, 26]. Our results add to these findings, indicating that key subcortical areas are also better preserved among AD patients who speak more than one language compared to those who only speak one.

The advantages of this study were a characterized bilingual and monolingual AD cohort, matched for age of presentation and general cognitive impairment, with automated volumetrics that assessed regions not typically evaluated such as the ventral diencephalon.

The ventral diencephalon has been previously implicated in neurodegeneration and cognitive reserve [27] and this structure includes the mammillary bodies that are part of hippocampal circuitry and has connections to the nucleus basalis of Meynert of the basal forebrain. The implication of the brainstem as increased in bilingualism is also relevant to AD pathogenesis given its inclusion of the locus coeruleus that also been implicated in early AD neuropathology [28]. Disadvantages and thus topics for future studies include inclusion of functional imaging sequences and longitudinal data on cognitive decline.

The degree of brain atrophy in individuals ‘matched’ for cognitive decline remains controversial and an area of active research. Several studies have found that among ‘matched’ individuals, the group with greater cognitive reserve, bilingual cohorts included, have greater brain atrophy for the same degree of cognitive decline [2, 29]. These differences in the studies may be due to the fact that the protective effect of cognitive reserve rapidly declines with greater degree of brain atrophy resulting in rapid deterioration after a ‘tipping point’ [30]. Additional topics for future directions can be to engage in amyloid and tau PET imaging as well as imaging of synaptic vesicles as different molecular imaging metrics of AD pathology and cognitive reserve. Hippocampal subfield segmentation as well as segmentation of language areas are also other approaches of possible future analyses. Overall, this study lends insight with quantitative brain MRI into novel neural correlates of higher cognitive reserve in bilinguals with AD.

In conclusion, this study adds to the literature on differences in brain structures between bilingual and monolingual patients with AD. In addition to the literature on greater mesiotemporal impairment at comparable levels of dementia, there may be relative preservation of critical subcortical structures, along with language areas and their connections, consistent with improved neural reserve with bilingualism.

Future studies of neuroimaging in these patients are needed to further clarify the neuroimaging structures that mediate neural reserve and the effects of bilingualism in delaying the onset of the clinicalsymptoms of AD.

[4] Mukadam N, Sommerlad A, Livingston G (2017) The relationship of bilingualism compared to monolingualism to the risk of cognitive decline or dementia: a systematic review and meta-analysis. J Alzheimers Dis 58, 45–54.

A, Sorbi S (2018) Contribution of bilingualism to cognitive reserve of an Italian literature professor at high risk for Alzheimer’s disease. J Alzheimers Dis 66, 1389–1395.